Comments Off on Basic humidity made easy

Definitions
There are several common terms that we use in our normal conversation but do not necessarily know what they actually mean. These are Dry Bulb Temperature, Wet Bulb Temperature, Relative Humidity, Dew Point Temperature and Adiabatic Saturation Temperature. Several discussions in the recent past have caused me to explain to others what many of these terms meant and why they were important to the processes in which they were used.

I know that this should not sound like a Thermodynamics course but we are continuously exposed to these terms on a regular basis and each has a specific meaning and use.

Dry Bulb Temperature – This is the most commonly used term and it is the one with which we have (or should have) the most familiarity. This is the temperature as measured by the normal thermometer. It is the sensible heat – the average thermal energy contained in our surroundings or the object of interest.

The Dry Bulb Temperature measurement is consistent across all disciplines. The remaining definitions are generally limited to gas-liquid vapor mixtures. In our normal experience they are confined to air-water relationships and the remainder of the discussion will be associated with this air-water relationship (Psychometrics).

Relative Humidity – This measurement is simply the ratio of the amount of water vapor currently in the air to the amount of vapor the air could possibly hold at that temperature. Even though this definition sounds simple, water is extremely non-linear and small changes in dry bulb temperature can significantly change the ability of air to hold moisture (changes in Dew Point) and as such the reported value of Relative Humidity. 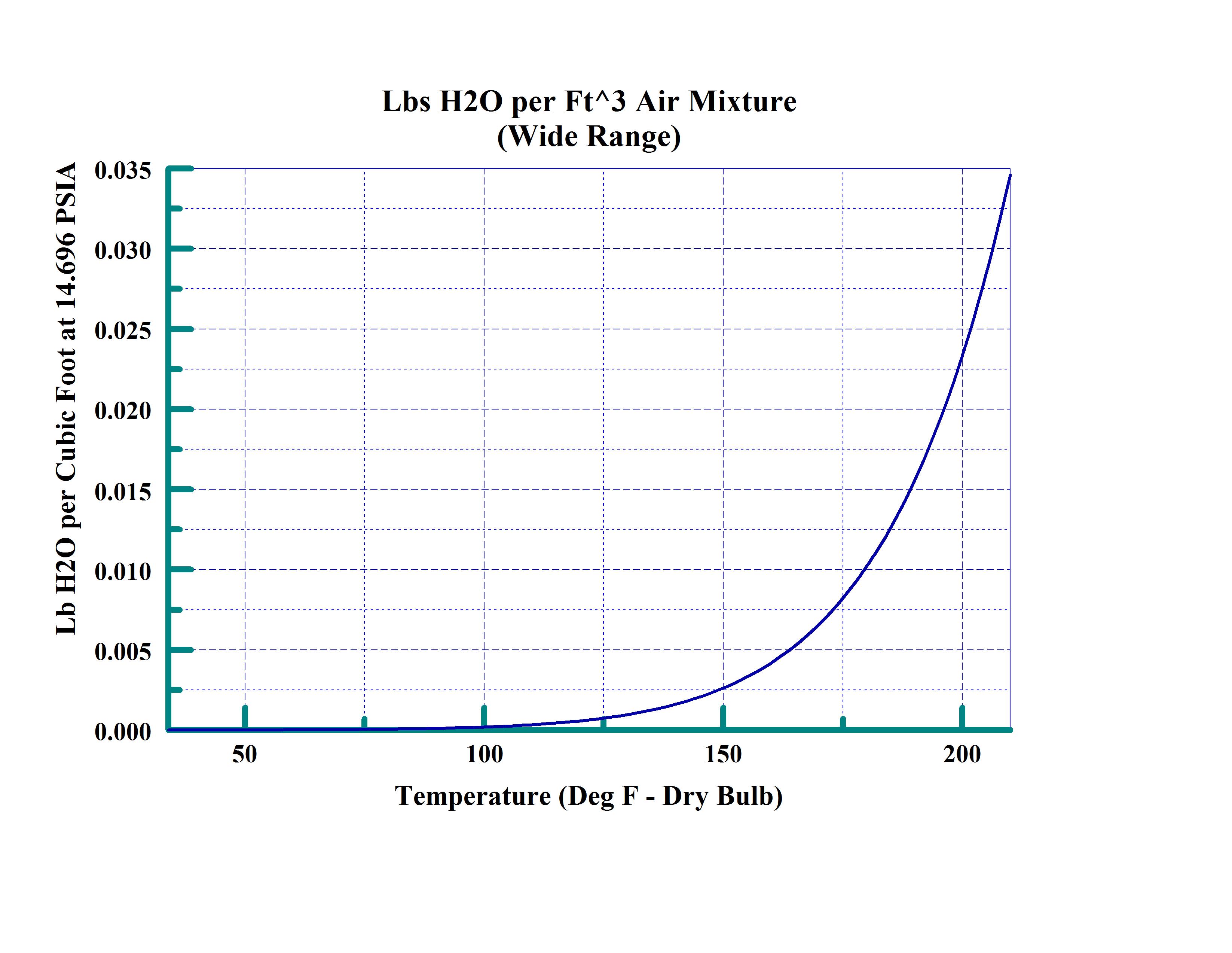 The chart above shows the ability of air at various temperatures at sea level to hold water. This wide range chart would be used for applications such as baking or drying materials. This is not the range that would be used for lower temperatures. The line represents air that is saturated with water (100% Relative Humidity). 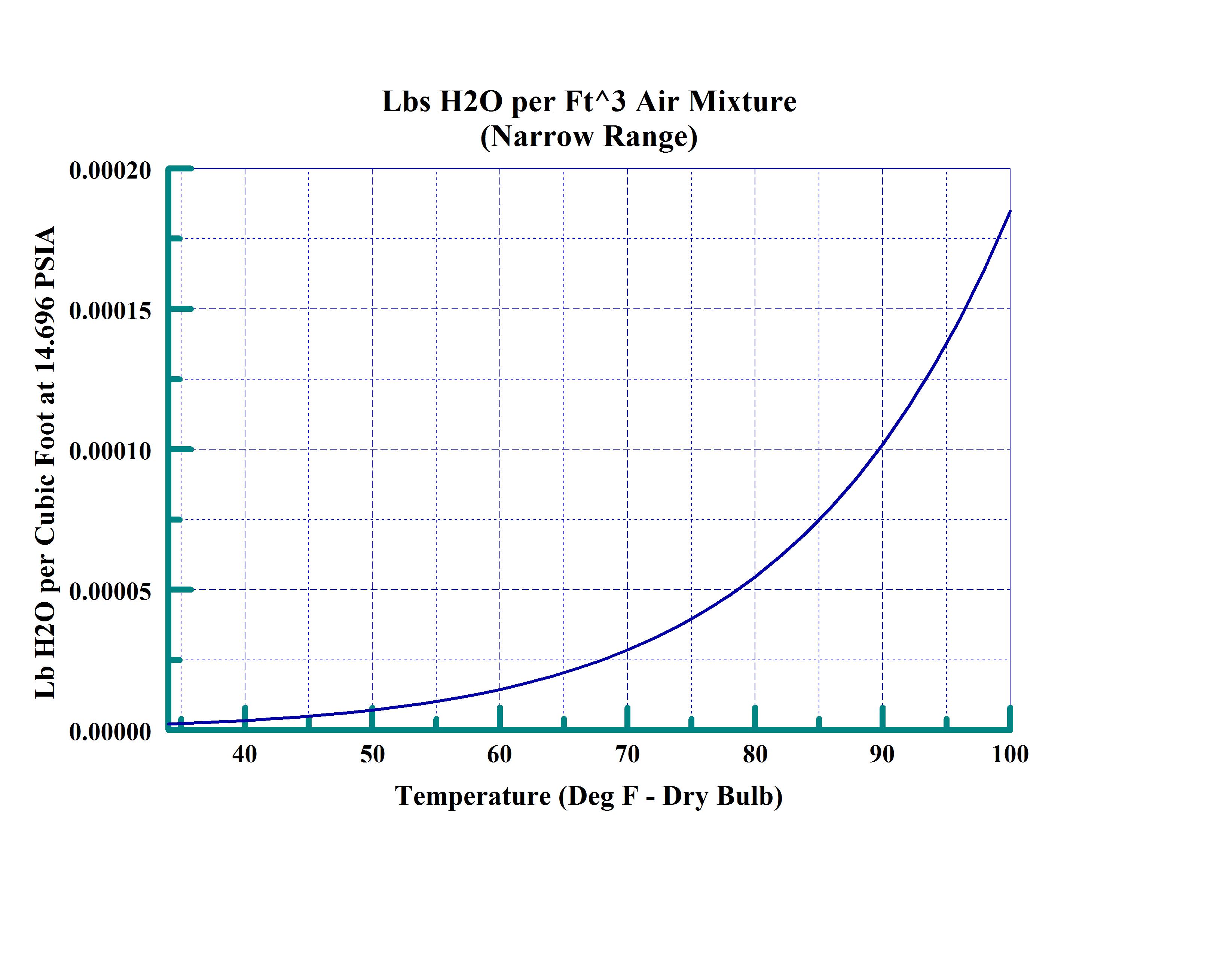 This next chart (Narrow range) is more commonly used at temperatures encountered in Heating and Ventilating conditions or for weather prediction. Normally a more complex chart is used (Psychometric Chart) for HVAC which contains additional related information – including Dew Point and Wet Bulb relationships. This representation is simply a rescaling of the wide range chart previously presented and also represents the amount of moisture that air can hold at sea level at various temperatures.

From these charts it is obvious that the amount of water that the air is capable of holding is non-linear and is generally represented by polynomial or logarithmic equations. This saturation line is the basis for many of the other calculations or properties of water.

Drying Processes
In processes that rely on the surrounding air to dry a product, such as spray drying, pulverizing wet materials, and baking it is important to know these relationships. Mixing air with the product of interest will not necessarily remove all of the moisture from the originally wet product. It is likely that the original product will have moisture remaining depending on the initial energy available in both the wet product (initial dry bulb temperature of the wet product) and the drying air.

If additional drying is needed, additional energy (heat) must be added to the air/solids mixture to allow the remaining moisture in the materials evaporate and reach a new balance between the energy of the air and moisture in the solids. Adding heat is not an Adiabatic process by definition.

Other variables, altitude (barometric pressure) and the dewpoint (and subsequently the Adiabatic Saturation Temperature as indicated by the Wet Bulb Temperature) of the air presented to the process, can have an effect on the drying process. As the altitude increases (absolute pressure decreases) the air becomes less dense and would require a larger volume of air to dry the product and it would require additional temperature in the drying medium (air) to achieve the same amount of moisture removal from the wet product. If the process is baking a product then the sequence or recipe for that product may need to be modified to accommodate the difference in altitude.

Cooling Processes
Evaporative cooling processes use the effects of Adiabatic Saturation Temperature (AST) to cool both the air passing through the process and the water that is evaporating. This allows equipment such as cooling towers to cool the circulating water below the ambient temperature. The AST defines the ultimate temperature achievable with a perfectly operating tower. However, it is not practical to build a “perfect” cooling tower but by knowing the meteorological data it is possible to build a cost effective piece of equipment that meets the needs of the process to which it is attached.

Wet Bulb Temperature meters (or an appropriate calculation of AST from other measurements) provide a good reference for the ultimate cooling available for a perfectly operating Cooling Tower system. The manufacturer will have the design curves to relate the ultimate cooling to the designed capabilities of the towers.