Comments Off on Spare Transformers

Spare transformers are kept in stock so that failed units can be replaced relatively quickly.  Absent a spare, most large power transformers have a replacement or repair time of at least 9 – 12 months.  On the transmission system, failure of one transformer will not result in service interruption, but during the long replacement time the power system is at risk of a second failure occurring.  This can affect load-serving capability, and inter-regional power transfer capability.

Mobiles are practical for transformers up to about 50 MVA; beyond that the sizes and weights become impractical.  Mobiles have the advantage of fast installation, but do not address the need for a permanent replacement; hence spares are also relevant for distribution system transformers, just as for transmission transformers.

On the distribution side of the house there may be hundreds of transformers, but typically of just a few voltage combinations, although of varying MVA capacity.  Most large utilities will have “35 kV”, “25 kV” and “15 kV-class” distribution systems, and multiple transmission supply voltages (69, 115, 138, 161, and 230 kV).  This results in many possible combinations of primary and secondary voltage, although not all combinations of high-side and low-side voltages may exist on a particular system.  Considering both the various voltage combinations and the several transformer capacities, provision of spares for the distribution transformers is a non-trivial exercise.

How to do it correctly

We need to look at probability of occurrence, replacement time, and cost.

Replacement time is relevant because it strongly influences the probability of two or more outages overlapping in time.  If the replacement time (no spare) is 12 months, but having a spare on hand reduces this to 1 month, the probability of having 2 or more transformers simultaneously out of service is significantly reduced, although not exactly in the ratio 1:12, as one might at first expect.   The resultant reduction is somewhat less, because the original higher-order (N-3, N-4, N-5) probabilities contribute to the revised N-1, N-2, and N-3 probabilities.

Computation of the N-0, N-1, N-2, etc. state probabilities is easily done using the Binomial Probability Distribution Function (BPDF) formula.   This is the correct method because this is a go/no-go situation, the failure rate is constant, and the failures are independent of each other (but possibly overlapping).  Technically, we’re dealing with a Bernoulli random variable; this is precisely what the BPDF models, exactly.

Cost of having a spare in stock is a relevant concern because it may not be optimal to have a spare for each particular voltage/MVA combination.  It may be more economical for one spare to cover more than one combination.  For example, suppose a system has the following distribution transformers:

In this instance it may be advantageous to skip having a 25 MVA spare, and just use the 50 MVA spare when a 25 MVA unit fails.  Although some transformer capacity is wasted by installing a 50 MVA  unit where a 25 MVA unit would be adequate, the long-term cost of this occasional waste of capacity may be less than the cost of having a rarely-used 25 MVA unit continuously in stock.

It is easy to make the analysis method unnecessarily complex, and it is easy to acquire and use bad data.  The result can be a difficult-to-understand method that yields spurious results.

One large utility was proud of having developed a very complex “Monte Carlo” model where each class and size of transformer was explicitly modeled, and each voltage combination had a different failure rate, supposedly based on actual field experience.  This model was yielding results that largely made little sense, although the method appeared to be mathematically correct.

The problems were several:

The practice of counting “scrapping” as a failure was defended by some of the utility staff through the interesting argument that if a transformer was old and hadn’t failed yet, it would have soon anyway, so it should be counted as a failure.  The fallacy of this reasoning is easily shown:

Spare transformers play an important role in making it possible to achieve high levels of service reliability.  The considerations are somewhat different between the transmission and distribution systems, but the proper analysis methods are similar.  Application of the Binomial Probability Distribution Function (BPDF) allows for direct computation of the various system states’ probabilities, and allows for prediction of the degree of improvement achieved with the addition of each spare.

For example, suppose that we have a fleet of 25 similar transformers with a failure rate of 0.8% per year.  If the outage duration is ordinarily 1 year, but reduced to 1 month if a spare is available, the probability of being in the various system states is 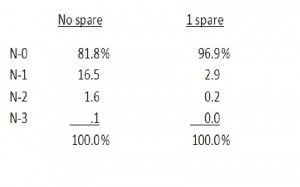 It is possible to compute revised probabilities for the scenarios of adding one, two, three, or any number of spares to the fleet.  One can then scientifically make informed statements regarding the incremental reliability improvement achieved with addition of each spare, and compare this to the cost of each spare.

The BPDF method requires only knowledge of the failure rate, and the number of transformers in the population.  It does not require purchase of, and training on, esoteric mathematical modeling programs.  Rather, it only involves use of one algebraic formula.  Consequently, it is an elegant and mathematically-defendable method of analyzing the spare transformer topic.

Although many more-complex methods of analysis can be formulated, these alternative methods are unnecessarily difficult to understand, and can easily produce erroneous results, especially if they are based on incorrect understanding of the physical realities associated with transformer fleet management.